If there is one person who deserves the title of founding father of Western rite Orthodoxy, it is probably Joseph J. Overbeck (1820-1905). A German by birth, ordained a Catholic priest in 1845, he became Protestant in 1857, married, settled in England and worked there on the editing of Syriac manuscripts. In 1865, Overbeck decided to join the Orthodox Church, although he was formally received in the Church only in 1869 — he had originally planned to take that step only after his request for the restoration of a Western Orthodox Church would be accepted, but later realised he could not make it a precondition. He would remain a faithful Orthodox until his death. From 1867 to 1885, he published the Orthodox Catholic Review.

While attending Byzantine services in existing Orthodox parishes as long as there was no other option, Overbeck and those supporting him rejected as a matter of principle any “Easternisation” of Western converts to Orthodoxy and did not favour the creation of Byzantine rite parishes using local languages for them. Overbeck felt that the right way was to transform the heterodox, Western tradition into an Orthodox one by setting aside everything that was heterodox in its teachings and liturgical books: the result would be a return to the pre-schism Western Church.

While Overbeck’s efforts were welcomed in some Orthodox circles and seriously considered by the Russian Church, it did never materialise for various reasons, including uncertainties about the real prospects of such a project. Overbeck himself had hoped to see his former Roman Catholic priesthood recognized, but his subsequent marriage was an impediment. A few people used to gather with Overbeck in London for praying the hours together each week until the early 1880s, but they finally despaired of seeing the realisation of Overbeck’s scheme and so instead were absorbed into existing, Eastern rite Orthodox parishes. 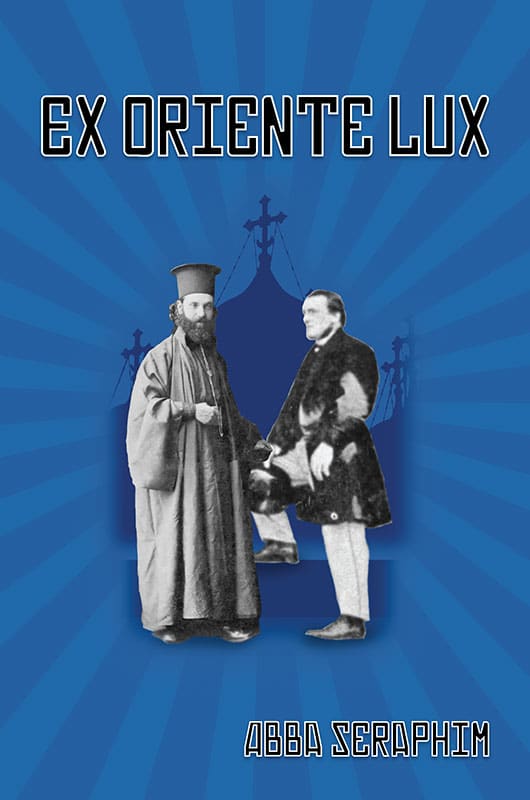 The most extensive treatment of Overbeck remains a book in German by Wilhelm Kahle, Westliche Orthodoxie: Leben und Ziele Julian Joseph Overbecks, Leiden and Cologne: Brill, 1968. But there is still research that can be done about his life and work. Thus people interested in this topic will be glad to know about a recent book by Abba Seraphim, Ex Oriente Lux. The story of Dr. Joseph J. Overbeck (1820-1905) and Father Stephen Hatherly (1827-1905, two converts to Orthodoxy with different conceptions of founding an indigenous Orthodox Church, London: The British Orthodox Church, 2018, 231 p. While Abba Seraphim, Metropolitan of Glastonbury, is known as the head of the “British Orthodox Church”, a small Christian group which was received into the Coptic Patriarchate in 1994 before resuming independence in 2015, he is also the author of several well-documented books appreciated by scholars.

For writing Ex Oriente Lux, Abba Seraphim chose a fruitful parallel approach, following the lives of two early Orthodox converts in England, who became life-long enemies after an early clash of personalities. They embraced radically different views of what Orthodoxy in the West was supposed to be:

“Hatherly believed the Byzantine Liturgy the very essence of Orthodoxy and told the Greek community in Manchester, ‘I glory in nothing more than that I stand before you as a Greek priest.’ Dr. Overbeck’s scheme for a Western-rite Orthodoxy was repugnant to Hatherly and he wrote to his rival that he would not stand by and see him ‘blend any figment of your old opery or any old Protestantism with our Orthodox ritual.'”

Hatherly wanted to establish Orthodox parishes where the services would be served in English by English clergy: “They would be no more ‘foreign’ to the Englishman than the rites and ceremonies of the recently restored Roman Catholic hierarchy.” (p. 45). But his efforts were put to an end in 1873 as the result of Anglican intrigues by instructions from the Ecumenical Patriarchate that “he should not conceive in his mind ‘the notion of proselytising… even one member of the Anglican Church, which has moreover given of late so many proofs of fraternal sympathy towards our Orthodox Church.'” (p. 121, see full text of the letter on pp. 193-196)

Overbeck believed that “both the Church of England and the Papacy were on the verge of desintegration and that the Orthodox Church needed to be prepared for the moment when Rome and Canterbury would finally collapse, so that it might step in and supply the deficiency.” (p. 50) Abba Seraphim observes that those views seemed less fanciful at that time than they do today.

According to Abba Seraphim’s assessment, there were several reasons for the failure of both schemes, including the antipathy between Hatherly and Overbeck, “but chief of these must be Anglican opposition” (p. 174).

“Although the Orthodox churches gave their approval to the theory of Western Orthodoxy, an innate conservatism would have ensured that its establishment in reality would be viewed with coolness and suspicion. Centuries of insularity had resulted in the tendency to associate the Byzantine rite with Orthodoxy, whilst the Roman rite had less pleasant associations.” (pp. 189-190)

“Despite the passage of more than a century, the dreams of Overbeck, and those of Hatherly, still remain in embryo state, but there are signs of growth and no Western Orthodox should be unaware of the debt that is owed to these two men.” (p. 190).

The book is well-written and packed with quotations from original, hard to find documents. It also includes several interesting old photographs. All references to sources are carefully provided in chapter endnotes and in the bibliography. Abba Seraphim is familiar with the books and articles relevant for the study of Hatherly and Overbeck, but he was also friend with members of the Hatherly family who provided useful information and made use of other materials:

“Besides the Orthodox Catholic Review and contemporary newspaper articles I have also drawn extensively on the large collection of letters written by Dr. Overbeck to Madame Olga Novikoff, an influential member of Russian society and keen supporter of his proposals. This collection of some three hundred hitherto unpublished letters [preserved at the British Museum], written between 1867 and 1898, throws much light on this little known subject.” (p. 12)

Any person who is seriously interested in the history of Orthodoxy in the West should definitely read this volume. It is printed and distributed by Lulu Press:
http://www.lulu.com/shop/abba-seraphim/ex-oriente-lux/hardcover/product-23782931.html.